The school year has just begun and already a national dialogue is taking place between school administrators, law enforcement and students about bullying – how to spot it, how to stop it. Parents have a crucial role to play as well. 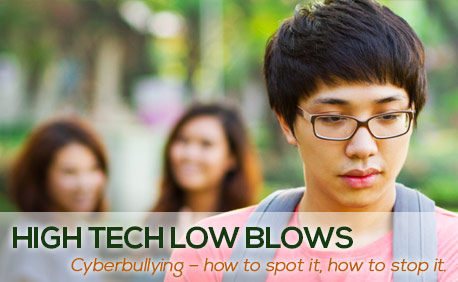 When you think of a bully, you may picture a tough guy who picks on a smaller boy and steals his lunch money. While that conduct would fall within the definition of bullying, there are, unfortunately, a wide variety of bullying behaviors. The broad definition used by the Olweus Bullying Prevention Program developed by Clemson and sanctioned by the South Carolina Association of School Administrators is “when someone repeatedly and on purpose says or does mean or hurtful things to another person who has a hard time defending himself or herself.” Bullying differs from other kinds of aggression between students in that (1) it targets a specific individual and isn’t accidental; (2) it is repetitive; and (3) there is a power imbalance between the students.

Bullying can take the form of verbal abuse, social exclusion, physical abuse, spreading lies and rumors, stealing or damaging property, and making threats. But as technology has changed other aspects of our lives, so has it changed bullying. A new word has entered our vocabulary, a new threat from which to protect our children: Cyberbullying. Easy and almost universal access to cell phones, instant messaging, mobile devices, social networking and other technologies has enabled bullies to cause widespread harm, at lightning speed, and to do it anonymously.

Sometimes cyberbullying involves creation of a website or blog on which the bully posts embarrassing pictures, messages which were intended to be private, or threats. Such posts can quickly “go viral,” causing devastation and even suicide attempts.
A 2007 Pew Internet Survey found that almost one-third of teens had experienced cyberbullying. In 2011, 88 percent of teens taking another survey said they had seen other people being mean or cruel on a social networking site. According to the PACER Center, which offers information and training to families of children with disabilities, students who use technology to bully “often look for targets who are vulnerable, socially isolated, or who may not understand social norms.”

Statistics about students’ internet usage, based on Pew study results, might surprise you.

Statistically, there is a good chance your child may already have been a victim of cyberbullying.

What makes someone become a bully? Many, as were the students responsible for the Columbine shootings in 1999, were victims of bullying themselves. In general, they have a strong need for power and are more likely to have seen or been involved in domestic violence. According to the Olweus Bullying Prevention Program, “too little love and care and too much ‘freedom’ in childhood are conditions that contribute to bullying behavior.”
South Carolina anti-bullying laws are found in S.C. Code Annotated Section 59-63-110 to -150, the Safe School Climate Act. They cover cyber bullying as well as other forms of harassment or intimidation. Under the Act, bullies may be punished not only for classroom conduct; they may also be punished for bullying on school grounds, on a school bus, at a bus stop, at a school event away from school premises, or at any other function in which the school is responsible for the child.

But parents need to play an active role in educating their children about and protecting them from cyberbullies. Today’s parents are the first who have had to learn how to deal with this issue. “Cyberbullying: What Parents Can Do to Protect Their Children,” a publication by the PACER National Bullying Prevention Center, offers the following suggestions:

According to the South Carolina Department of Education, bullying is at its peak in middle school. By the time they reach high school, one in four students lists bullying as their main fear. Parents, don’t leave it all up to the schools, and don’t put it off – help strike a blow against bullying. We have listed below some of the resources that will help you discuss bullying with your child and know what to do if your child is the victim of a bully, cyber or otherwise.

Cyberbullying: What Is Cyberbullying and How to Stop It, https://www.callersmart.com/guides/49/What-Is-Cyberbullying-and-How-to-Stop-It

Help Your Child Recognize the Signs of Bullying, http://www.pacer.org/publications/bullypdf/BP-2.pdf