According to a report recently released by the non-profit Trust for America’s Health – aptly titled “F as in Fat” – South Carolina has the seventh-highest adult obesity rate in the country (31.6 percent). South Carolina also ranks seventh in the country for adults with diabetes (11.6 percent) and seventh for adults with hypertension (36.4 percent). 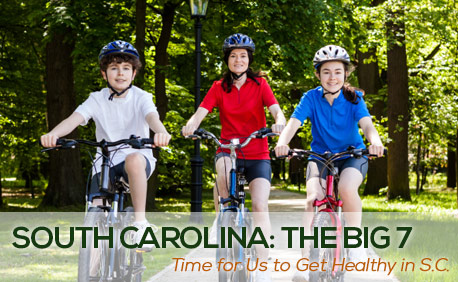 The Introduction to the TFAH report warns, “If we fail to reverse our nation’s obesity epidemic, the current generation of young people may be the first in American history to live sicker and die younger than their parents’ generation.” [You can read the entire report here.] They’re likely to be poorer as well. According to the Centers for Disease Control, the estimated annual medical cost of obesity in the U.S. was $147 billion in 2008 U.S. dollars; the medical costs for people who are obese were $1,429 higher than those of normal weight.

Is our famous southern hospitality partly to blame? Of the states with the 20 highest adult obesity rates, only Pennsylvania is not in the South or Midwest. And nine of the 10 states with the highest rates of type 2 diabetes and hypertension are in the South.

Tony Keck, director of the S.C. Department of Health and Human Services, told the Post and Courier that obesity is a complex problem that must be solved through collaboration. “That means that health care does have a role. Schools have a role. Public safety has a role, in terms of making sure streets are safe and playgrounds are safe. Local, state and federal transportation departments have a role in making sure people have opportunities to walk or bike,” he said. “All of these things contribute to the growing problem of obesity and it’s not just rich and poor. It’s not just black and white. It’s everybody, so you have to get everybody around the table.”

Several proposals are being considered by South Carolina state leaders, including a limitation on what food stamp recipients can buy with their EBT cards, which would require the federal government’s approval. The S.C. Medical Society has an obesity task force, and the S.C. Chamber of Commerce is also addressing the issue. A new program in the greater Charleston area, Eat Smart Move More, is designed to improve eating habits and increase physical activity.

A video presentation on the CDC website offers these views on the environmental factors which have influenced our nation’s weight crisis:

The CDC proposes the following solutions which individuals and communities can adopt to reduce obesity:

It’s not New Year’s Day, but we think this is a good time to make a resolution to do what we can, as individuals and as a state, to see that in next year’s F as in Fat report South Carolina weighs in lower on the scale and higher in determination.