Motorcoaches are a popular way to travel. The Greyhound slogan was “Leave the driving to us,” and many thousands of people do leave the driving to Greyhound and other motorcoach operators every year. In 2010, U.S. motorcoach companies provided nearly 700 million passenger trips, second only to the airlines. Bus transportation is generally safe, but when an accident does happen, there are likely to be multiple victims.

Statistics from the National Highway Traffic Safety Administration show that between 2000 and 2009, there were 87 fatal crashes of motorcoaches, resulting in 209 fatalities.

On April 10, 2014, a fiery collision between a FedEx big rig and a motorcoach carrying California high school students left 10 people dead. The accident is still under investigation, and federal authorities are again considering what measures can be taken to improve the safety of bus passengers. It was only a few months ago that NHTSA issued a rule mandating that all motorcoaches made after 2016 be equipped with three-point shoulder-lap safety belts. The Silverado Stages vehicle in the Orland, California, crash was brand new, and it had seat belts, even though it was not required to. You have to wonder how many of the high school students had actually buckled up.

END_OF_DOCUMENT_TOKEN_TO_BE_REPLACED

FDR said, in his second inaugural address, “We have always known that heedless self interest was bad morals, we now know that it is bad economics.” He was referring to the abuses that led to the 1929 stock market crash and the Great Depression. 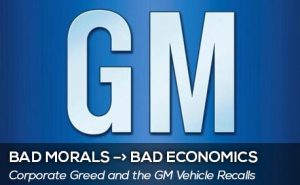 Even now, nearly eight decades later, we find that corporate greed has led to unconscionable decisions which, in turn, have resulted in peril for one of America’s industrial giants and for millions of American citizens. I’m referring to the choice by GM not to spend one dollar per car to correct the problems with the ignition switch that has cost at least 12 people their lives and caused 31 accidents. GM itself faces a criminal investigation and multiple lawsuits alleging they knew about the faulty ignition switches in 2002 but waited until 2014 to recall a total of 2.5 million vehicles that have ignition switches that may easily be moved out of the “run” position and into the “auxiliary” position, causing loss of power, steering, braking, airbags and lighting. That’s bad economics any way you look at it.

Two recent court rulings are of interest to us as a law firm which represents the rights of whistleblowers who bring to light fraudulent activity.

The first is a decision of the U.S. Supreme Court in Lawson v. FMR, a case in which the whistleblowers worked for a contractor hired by Fidelity Investments to provide advisory and management services. The two employees were dismissed after they raised concerns about what they claimed were misrepresentations in the fees charged to shareholders and the disclosures made to the SEC.

And the answer, announced last month by the National Highway Transportation Safety Administration (NHTSA) is 2V . . . or, more precisely, V2V.

V2V technology allows vehicles to communicate with each other and to share important data with the driver. For instance, basic safety data like speed, location and direction of travel are collected from a 360-degree radius, analyzed for risk, and used to warn the driver to take action (like removing a foot from the gas pedal) to avoid common types of crashes like rear-end and intersection collisions.

This advancing technology was tested in a year-long pilot program run in Ann Arbor, Michigan, by the U.S. Department of Transportation. They outfitted almost 3,000 vehicles with Dedicated Short Range Communications (DSRC) capability – a technology similar to Wi-Fi ; recruited and trained volunteers; and sent the vehicles out onto 73 lane-miles of city streets and freeways.

END_OF_DOCUMENT_TOKEN_TO_BE_REPLACED

There’s a bar in Kazakhstan named Guns N Roses. It’s probably not a place you’re going to frequent – it’s a bit of a drive to get there. A little closer is the Double Shot Liquor & Guns store in Schulenburg, Texas. It even has a drive-thru window. Still too far to travel? Well, thanks to the law recently enacted in South Carolina, you can now take your family to a restaurant just down the street and be in the presence of both alcohol and ammo.

On February 11, 2014, South Carolina Gov. Nikki Haley signed into law Senate Bill 308, the “Concealed Carry Reform Bill.” It permits gun owners who have a Concealed Weapons Permit (CWP) to take guns into establishments that serve alcohol. Those who tote are not supposed to tipple, but who’s to know?

Some folks have applauded this legislation which enhances the rights of gun owners. But what about the rights of others involved?

END_OF_DOCUMENT_TOKEN_TO_BE_REPLACED

This year we’ll be celebrating Presidents’ Day on February 17. Originally established to celebrate George Washington’s birthday, President’s Day is now viewed as a day to celebrate all U.S. presidents.

We’re in mind of Thomas Jefferson, author of the Declaration of Independence and the third U.S. president, who said, “Were it left to me to decide whether we should have a government without newspapers, or newspapers without a government, I should not hesitate a moment to prefer the latter.”

Why did Jefferson think so? Because the media plays an important role and provides a great service to the public by informing them about topics that could have a direct impact on their life, liberty and pursuit of happiness. And why are we reminded of this just now? Because news organizations have been following and reporting on a situation of great importance to residents in our area – the groundwater contamination by a Hoechst Celanese polyester fiber plant previously located in Spartanburg. Residents of the Cannons Campground community allege that the pollution has exposed them to serious health issues, including cancer, sometimes leading to untimely death.

Once again Toyota has come under fire, so to speak, because of a manufacturing/design defect in some of their vehicles. The problem is that the materials used in their heated seats – such a welcome luxury this time of year – are not as flame resistant as required by U.S. regulatory standards. 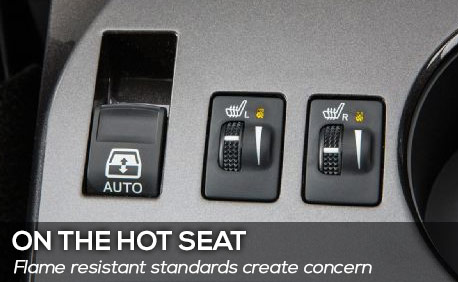 Toyota has issued a stop-sale order to their dealers for the affected models, which include the Camry, Camry hybrid, Avalon sedan, Avalon hybrid, Corolla subcompact, Sienna minivan, Tundra and Tacoma trucks made since August 2012, when the fabric supplier was changed. So far there hasn’t been a recall of cars already on the road.

END_OF_DOCUMENT_TOKEN_TO_BE_REPLACED

“Environmental justice” may be a term you haven’t considered before. According to Robert Bullard, who wrote a book in 1990 entitled Dumping in Dixie: Race, Class and Environmental Quality, environmental justice concerns the “unfair, unjust and inequitable conditions and decisions” that subject “blacks, low-income groups and working-class persons… to a disproportionately large amount of pollution and other environmental stressors in their neighborhoods as well as in their workplaces.”