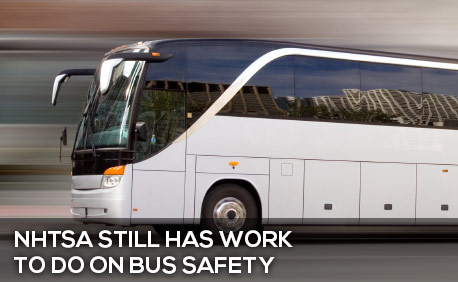 Motorcoaches are a popular way to travel. The Greyhound slogan was “Leave the driving to us,” and many thousands of people do leave the driving to Greyhound and other motorcoach operators every year. In 2010, U.S. motorcoach companies provided nearly 700 million passenger trips, second only to the airlines. Bus transportation is generally safe, but when an accident does happen, there are likely to be multiple victims.

Statistics from the National Highway Traffic Safety Administration show that between 2000 and 2009, there were 87 fatal crashes of motorcoaches, resulting in 209 fatalities.

On April 10, 2014, a fiery collision between a FedEx big rig and a motorcoach carrying California high school students left 10 people dead. The accident is still under investigation, and federal authorities are again considering what measures can be taken to improve the safety of bus passengers. It was only a few months ago that NHTSA issued a rule mandating that all motorcoaches made after 2016 be equipped with three-point shoulder-lap safety belts. The Silverado Stages vehicle in the Orland, California, crash was brand new, and it had seat belts, even though it was not required to. You have to wonder how many of the high school students had actually buckled up.

The first motorcoach accident investigated by the NTSB occurred in 1968, when a charter coach overturned and burned near Baker, California. Nineteen of the 30 passengers aboard were killed. Even way back then, the NTSB found that “one of the primary causes of passenger injury and fatalities in motorcoach accidents is that the passengers are thrown out of their seats or ejected when a bus sustains a front, side, or rear impact or rolls over,” and they advocated passenger restraint systems.

On February 14, 2003, a crash near Hewitt, Texas, killed 5 and injured 9, and the NTSB found that the fatalities were a result of occupants’ being ejected from their seats.

Two high-profile motorcoach accidents in 2008 —one in Sherman, Texas, and the other near Mexican Hat, Utah— resulted in numerous passenger fatalities and serious injuries. At that time it was noted that “even when the motorcoach remains relatively intact during an accident, passengers lacking a protective seating environment can be thrown from their seating area and killed or injured.”

In passing the final rule requiring safety belts in motorcoaches after 2016, NHTSA took what some consider to be just the first step toward passenger safety. They did not require that older buses be retrofit with seatbelts, nor did they take measures to help ensure that passengers avail themselves of the safety equipment when it is available. In light of the fact that innocent people are still dying in motorcoach accidents, even when safety belts have been installed, it would seem that an additional step could provide additional protection – i.e., reminder systems like what we are accustomed to in our personal vehicles and on airplanes.

A news report following the California crash quoted a former NTSB chairman as saying, “Unfortunately, motorcoach safety has historically been an orphan at NHTSA. This is the transportation that carries primarily older people, students and low-income people. It hasn’t been a priority (for regulators).”

Wow. No wonder it took an act of Congress (the Motorcoach Enhanced Safety Act of 2012) to put safer buses on the road, resulting in the NHTSA rule re seat belts. Sounds like NHTSA needs to improve upon its own rule and also find a way to make passengers take advantage of the improvements the carriers have to pay for. And they haven’t even addressed the other topics Congress told them to look at, like ease of evacuation, fire suppression, smoke suppression and improved fire extinguishers, all factors which could have been at play in the California crash.