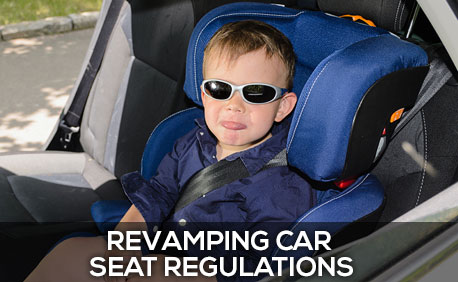 In the news this third week of January 2014 is the recommendation of NHTSA that standards be upgraded for car seats designed for children weighing up to 40 pounds. If the proposed regulation is adopted, child car seats would for the first time have to protect children from death and injury in side-impact crashes. New car seats in this category would have to pass a test simulating a T-bone crash where a vehicle going 30 mph strikes a smaller vehicle going 15 mph.

For many years, safety advocates have sought tougher standards for children’s car seats to protect against side-impact crashes. The current regulations for child restraint systems are found in Section 571.213 of the Code of Federal Regulations (http://www.fmcsa.dot.gov/rules-regulations/administration/fmcsr/fmcsrruletext.aspx?reg=571.213). The new regulation proposed by NHTSA won’t take effect immediately. The public will have 90 days to comment on the proposed regulations, then the agency will review the comments and address issues which might be raised; after that, car sear manufacturers will have three years to meet the new requirements.

In the meantime, parents must simply do their best to provide their children with car seats and booster seats that meet current guidelines and must be vigilant about their use. The American Academy of Pediatrics publishes a listing of car seats which meet federal safety standards as of 2013. It is here: http://www.healthychildren.org/English/safety-prevention/on-the-go/Pages/Car-Safety-Seats-Product-Listing.aspx

Additionally, here are some tips that could help you determine if you are using the best protection while transporting your children:

The federal regulations setting standards for car seats are aimed at manufacturers. However, state laws are aimed at drivers, and a violation of South Carolina’s Child Passenger Safety Seat Law can land you with a $150 fine. This state law is found in Section 56-5-6410. It requires “an appropriate child passenger restraint system” for children 5 years of age or younger. The law gives specifics according to age and weight and states whether the seat must be backward or forward facing. The South Carolina law can be found here: http://www.scdhec.gov/administration/library/CR-008006.pdf

Some of us remember the days when kids piled into the family station wagon and were concerned only with complaining that a sibling was unfairly taking up too much of the seat. But the “good old days” weren’t good in all ways, and we need to take advantage of the modern safety requirements imposed on manufacturers of car seats and other consumer goods.