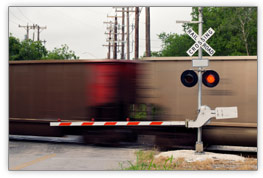 A highway-rail accident took the life of a Marion County, SC, man on Saturday, July 13. Police investigators say the 66-year-old man drove around the deployed train track caution gates and was struck by the oncoming train.

With more than 212,000 highway-rail grade crossings in the country, according to the Federal Railroad Administration, it’s clear that drivers are going to be confronted with delays caused by passing trains. And some drivers are going to ignore the warning systems and try to beat the train across the tracks.

The Federal Railroad Administration’s Office of Safety Analysis reports that in 2012, there were 1,960 highway-rail collisions, resulting in 271 deaths and 930 injuries. And nearly 50 percent of the vehicle/train collisions occurred at crossings with active warning devices such as gates, lights or bells.

As in the recent Marion County accident, which took place around 6:15 p.m., 64 percent of all collisions occur during daylight hours. Experts say that because trains are large objects, drivers underestimate their speed, basing their judgment on their more common experience of encountering automobiles. In addition, people know that signals are activated in advance – sometimes far in advance – and so they don’t always believe that the train’s appearance is imminent.

It’s not a chance worth taking. It can take a train a full mile or more to brake – so a motorist certainly can’t depend on the train’s taking evasive action. A typical train weighs 3,200 tons. National Highway Traffic Safety Administration statistics show that a motorist is almost 20 times more likely to die in a crash involving a train than in a collision involving another motor vehicle.