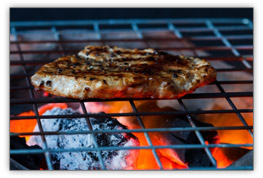 Along about this time of year, the males of our species come out of their mancaves, grab some audacious meat (or even some humble veggies), fire up the grill and prepare to impress women and children with their barbecuing prowess. We don’t mean to sound chauvinistic, but surveys report that men are twice as likely to wield the tongs as women. Nevertheless, we hope the following information will be useful to both guys and gals at the grill.

JUST THE FACTS, MA’AM
There’s no doubt that cooking out is a great American pastime. Neither is there a doubt that it is dangerous, with a huge potential for grilling injuries. Consider:

GENERAL GRILLING GUIDELINES
Whether the grill you are using is fueled by gas, charcoal, or even wood, the following safety tips from FEMA apply:

PROPANE POINTERS
Which cooks better–gas or charcoal? We won’t get into that debate; the important thing to recognize is that propane is the power source in 69 percent of all grill fires on residential properties. In situations where a person was injured while using a gas grill, roughly a third were burned while lighting the grill.

Some of problems lie with the grills themselves. The Consumer Product Safety Commission has issued numerous recalls, 24 of them since 2005, for gas grill problems ranging from faulty burners to missing hoses to incorrect heat shields.

CHARCOAL CHECKLIST
With charcoal grills, gasoline or lighter fluid is a factor in about a quarter of burn injuries, according to the National Fire Protection Association. That usually happens when would-be grillers get impatient with charcoal that seems to be taking too long to light and decide to add fuel to the flames. Bad idea!
Here are FEMA’s safety rules for using a charcoal grill:

A SURPRISING SOURCE OF COOKOUT INJURIES
So just when you think you’ve made it safely past all the barbecue pit pitfalls – there have been no sudden conflagrations, your house is not on fire, you still have your eyebrows and the same amount of hair you started with – guess what . . . you may have made one tiny mistake. If you used a wire brush to clean the grill before you started, there could be a tiny bristle hidden in the char you worked so hard to achieve on that ribeye. And it could cause serious injuries when it goes through the lips and over the gums.

In July of 2012, the Centers for Disease Control urged emergency rooms to be on the lookout for internal injuries caused by accidental ingestion of wire grill-cleaning brush bristles. There were numerous reports of people experiencing abdominal pain from wire bristles’ poking through the small intestine or colon or throat pain from the bristles’ getting stuck in the neck. The injuries required surgery.

Experts recommend that you use a moist cloth or paper towel to clean cooled grates. If you use a wire brush, replace it every two or three months. After cleaning the grill, Inspect the surface for any remaining wire bristles.