Despite the fact that South Carolina is one of only two states in the nation that have not passed legislation to ban the use of cell phones or other electronic devices, we’re still subject to the laws of other states when we travel through them, and to the myriad local regulations of communities within the state which have passed their own texting bans: Columbia, Beaufort, Mt. Pleasant, Camden, Clemson, Sumter, West Union, and Walhalla among them. 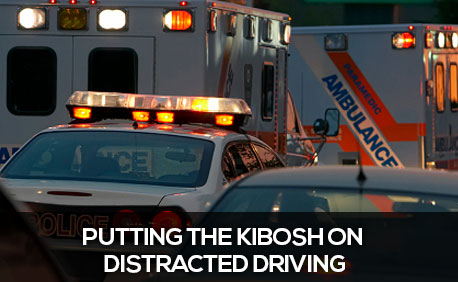 One issue for local and state lawmen is how to enforce the ban. Some local police departments simply do not have the manpower or funding to step up surveillance, so their texting ordinance is on the books but not on the minds of officers seeking to stop more serious crimes. Other police forces cite the difficulty of proving the driver was texting when he or she has had time to lay the phone down between the time of initial sighting and being pulled over.

There have been some interesting proposals to enhance the enforceability of distracted driving laws. In New Jersey, a legislator filed Senate Bill (SB) 2783, which would allow police to look through cellphones without warrants, to determine whether drivers were texting or talking when a traffic accident occurred. No action has been taken on the bill because, oh yeah, there’s that constitutional requirement of probable cause before a search. The ACLU is on top of this one.

Jeff Larson, president of the Safe Roads Alliance, a Massachusetts nonprofit said, “It’s a new thing to try to figure out how to enforce something like this, and there’s a lot that’s being learned. They’ve never done this before, so they need to learn techniques and teach techniques.” One tactic is to put police officers in unmarked SUVs, rather than sedans, so they are better able to look down into the driver’s seat of the car next to them.

In Irwin, Pennsylvania, a borough southeast of Pittsburg, Route 30 going through town routinely clogs with traffic congestion as workers commute to the big city. While cars are stuck in the slowed traffic, police officers are watching. They count as drivers tap their cell phone screens. If they see more than 10 taps, police assume the driver is sending a text message.

A recent crackdown in Hartford, Connecticut, found officers concentrating on morning and evening rush hours, positioning themselves in areas where people were getting on the highway and where there was room to pull people over. They also had officers stationed on top of buildings with binoculars, radioing to officers on the ground. A similar campaign was going on in Syracuse, New York.

The Hartford and Syracuse projects combined an educational crusade with concentrated police enforcement, an approach that was effective but underscores the difficulty many agencies have in affording strict enforcement. Advertising the distracted driving push on TV, radio and online cost Syracuse and Hartford $559,161. Their police departments dedicated between 1,045 and 1,370 hours to the enforcement wave. They each received $200,000 in federal funding and $100,000 from their states to help with the pilot project. U.S. Transportation Secretary Ray LaHood has called for increased federal funding to help local governments enforce their distracted driving laws.

In a proactive effort to reduce texting on the road, New York has announced plans to establish 91 “Texting Zones” along state highways. Signs along the road will tell drivers how far away the nearest texting zone, rest stop or parking area is so that they can wait to respond to a text, or make a phone call, in a safe area.

Statistics, and our own experience on the road, conclusively show that distracted driving is a real problem, and stopping it before it happens is perhaps a better approach than ticketing for it afterwards. According to an article in Charleston City Paper, City Councilman Bill Moody recently said, “[W]hat I think we’re saying, and what the community wants us to say, is when you’re driving your dadgum car, drive your car and quit doing all that other crap.”

I couldn’t have said it better.