This month, the old adage “A stitch in time saves nine” takes on new meaning.  Each September since 2004, the Federal Emergency Management Agency (FEMA) has observed National Preparedness Month. During September, FEMA and many other agencies, on local, state, and federal levels, encourage U.S. residents to become better prepared for emergencies and disasters. 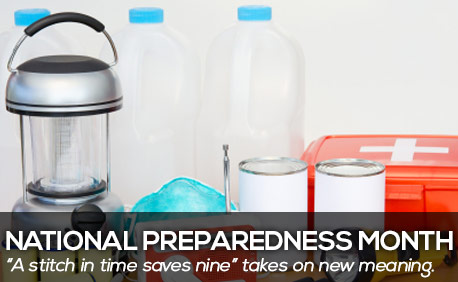 It is so easy to think that natural disasters and other unexpected events happen only to other people.  Or to agree that preparedness is a good thing and resolve to do it some day, when we have extra time.  The National Weather Service warns, “We’ve seen tornado outbreaks, river floods and flash floods, historic earthquakes, tsunamis, and even water main breaks and power outages in U.S. cities affecting millions of people for days at a time. Police, fire and rescue may not always be able to reach you quickly in an emergency or disaster. The most important step you can take in helping your local responders is being able to take care of yourself and those in your care; the more people who are prepared, the quicker the community will recover.”

The Centers for Disease Control and Prevention (CDC) and the American Red Cross urge a 3-step plan:

In South Carolina, the Emergency Management Division of the Adjutant General’s Office is responsible for the development, coordination, and maintenance of the South Carolina Emergency Operations Plan, Hurricane Plan, Earthquake Plan, and Terrorism Plan, among others.  They also oversee training of state and county emergency planners and response personnel and execute state emergency management exercises.

South Carolina is among the states most vulnerable to hurricane damage, and we are accustomed to keeping an eye on tropical weather systems.  However, the SC Emergency Management Division urges preparedness for a wide variety of potential disasters.  Consider the following:

Residents of Colorado have recently been victims of historic flooding.  At this writing, at least five people were confirmed dead, roads and bridges wiped out, and about 1,500 homes destroyed, according to Colorado Office of Emergency Management officials.

South Carolina’s low-lying topography, combined with its humid subtropical climate, makes it highly vulnerable to inland flooding. The largest such flood in South Carolina occurred in 1903, the Pacolet River rose as much as 40 feet in an hour, resulting in the deaths of sixty-five people.  The state is also vulnerable to coastal flooding from tropical storms or hurricanes.  In 1999, three tropical systems resulted in over 24 inches of rain in Horry County. The Waccamaw River and tributaries caused significant flooding throughout northeastern South Carolina.

Yes, it is possible to prepare for a flood.  These are the recommendations of the SC Emergency Management Division: