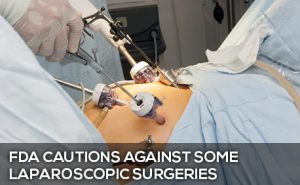 Laparoscopic surgeries – those done “robotically” through small incisions – have become preferred by doctors and patients in many instances, because they mean less time in the hospital, quicker recovery and minimal scarring. On April 14, 2014, however, the FDA issued a Safety Communication about the device used to accomplish some of these surgeries, specifically hysterectomies and surgeries to remove fibroid tumors in women.

The surgical device is called a morcellator, and it is produced by five companies, including Johnson & Johnson. The surgeon inserts the morcellator into the uterus through a small incision. Its blades chop up the tissue so it can be removed through the same tiny incision. What they are finding, however, is that when women have an undiagnosed cancer, a uterine sarcoma, the cancerous tissue also gets divided and may spread malignant cells throughout the abdomen and pelvis, “significantly worsening the patient’s likelihood of long-term survival.”